In this version of the Nutcracker tale, Clara (Mackenzie Foy) is given a gift from her deceased mother – an egg shaped case that’s locked. Clara and her family travel to Drosselmeyer’s (Morgan Freeman) house for a Great Gatsby style holiday party. When Drosselmeyer gives out gifts to the children, Clara’s string leads her to the magical land of four realms where the key to her mother’s gift is. It’s not long before her key is stolen by a mischievous mouse. This leads Clara to Captain Hoffman aka The Nutcracker (Jayden Fowora-Knight), the protector of three realms. 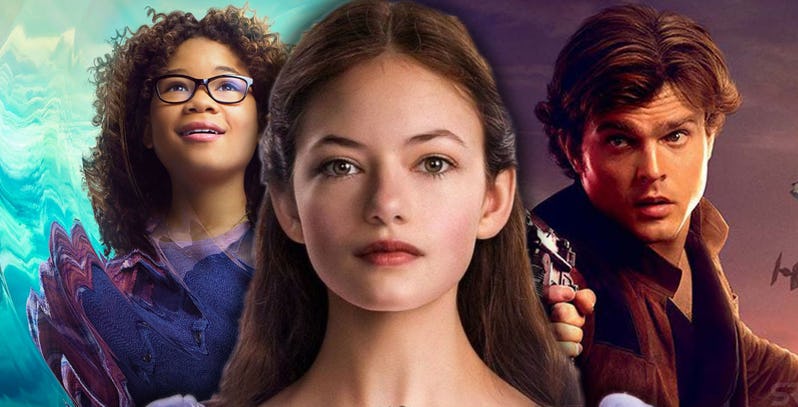 Nutcracker and The Four Realms feels like a knock-off version of The Lion The Witch and The Wardrobe, a much better film that did everything this movie tries but did it better.  Clara’s journey to the realms and the “you’re the one” Neo vibes are unoriginal and uninteresting. The story doesn’t try to do anything interesting with the characters or the realms. The film borrows from other films – the ballroom dance scene is reminiscent of Beauty and the Beast, the two bumbling guards are like the cops in Wreck-it Ralph, and the watchful owl is from Clash of the Titans. Morgan Freeman with his eye patch might as well be Nick Fury.

The story doesn’t do anything interesting with Clara, its main character. Why her mother thought she was interesting and whatever made her special is never explored. Not to mention, Clara never reacts to all the craziness swirling around her when she visits The Four Realms. Everything about the character and her interactions feels muted.

The lack of parental supervision is jarring. Drosselmeyer sending Clara to a dangerous land with no supervision is even more alarming. None of these adults care what happens to children because they routinely send them on dangerous missions.

The most interesting scene is Misty Copeland as The Ballet Princess. She does a beautiful ballet performance that explains The Four Realms and the conflict with Mother Ginger (Helen Mirren). The story could’ve used a lot more out of the box storytelling to stop it from feeling like a flat retread of every child fantasy movie over the past 10 years.

The Nutcracker and The Four Realms is entertaining for kids and will get people in the mood for Christmas.  For all of its colorfulness and crazy characters, the expansion of the classic Nutcracker story is just a bad clone of other kid’s fantasy movies.

Disney’s take on the classic ballet, The Nutcracker and the Four Realms, is the studio’s worst reviewed movie of 2018. Up until now, The Walt Disney Studios has had a great year. Avengers: Infinity War instantly became one of the biggest movies ever made, the long-awaited Incredibles 2 broke box office records for animated films, and Black Panther remains the most enduring pop culture milestone of the year. While there have been some disappointments, such as the under-performing blockbusters A Wrinkle in Time and Solo: A Star Wars Story, the company remains unbeatable in Hollywood, not only commercially but critically. But that may be about to change.

The Nutcracker and the Four Realms, which will be released this week, is the latest live-action film from Disney. An adaptation of the German fairy-tale and the Tchaikovsky ballet, the story signifies the studio’s further attempts to expand their live-action output beyond remakes of their classic cartoons and Pirates of the Caribbean sequels. Directed by Lasse Hallstrom and Joe Johnston, the film stars Mackenzie Foy, Keira Knightley, Morgan Freeman and Helen Mirren, and retells the classic story with a greater focus on narrative over the spectacle of dance (although ballerina Misty Copeland does make an appearance). The film was considered an oddity by many Disney fans long before its release, and anticipation for it was noticeably lower than other more familiar Disney releases from 2018. A title like this would need great reviews to overcome such skepticism.

The Nutcracker and the Four Realms Review: An OK Disney Holiday Film

Unfortunately, the reviews have been a new low for Disney in 2018. Currently, the movie has a Rotten Tomatoes score of 34% and a Metacritic number of 37. While its main competition this week – the Queen biopic, Bohemian Rhapsody – is similarly negatively reviewed, it still has higher aggregate scores of 58% and 48, respectively. The numbers for The Nutcracker and the Four Realms don’t stack up much better when compared to its studio competition: Incredibles 2 has scores of 94% and 80, and remains one of the best reviewed blockbusters of the year; Black Panther remains the jewel in Disney’s crown in 2018 with scores of 97% and 88; Avengers: Infinity War is slightly lower with 84% and 68; Even Ant-Man and the Wasp – oft-dramatized as the Marvel flop of the year – has scores of 88% and 70.

Disney’s worst reviewed film of 2018 up until The Nutcracker and the Four Realms was A Wrinkle in Time, and that still managed to surpass its paltry review scores with 42% on Rotten Tomatoes and 53 on Metacritic. It may be purely coincidence that Disney’s two critical disappointments of the year are both live-action adaptations of non-Disney properties, but it speaks volumes to the studio’s struggle to maintain this particular strategy in the long-term.

Live-action remakes of classic titles are becoming Disney’s bread and butter outside of their acquired franchises. They manage to overcome middling to negative reviews to become box office smashes, such as last year’s Beauty and the Beast. This is partly because the properties themselves are so recognizable and beloved by millions. The built-in brand synergy and revival of nostalgia is too good to resist. Neither A Wrinkle in Time or The Nutcracker and the Four Realms have that advantage. Both are known intellectual properties – and the latter is public domain, meaning Disney can make their own easy-to-brand version – but neither had decades of growing fan attachment in the way, say, Cinderella had when it was remade. Plenty of people know what The Nutcracker is and go to see a performance of the ballet during the holidays, but there’s a huge difference between that and getting people to see a movie where the dance element is secondary.